Bristol alt-rock outfit Life In Mono released their double A-side singles “Blackout/ Sex to White Noise.” The tracks bookend each other for an overall composition of dismay but can equally stand alone in their self acknowledgment and hooks.

Sarah Clayton, James Davis, Adam DT, and Mike Gill craft a remarkable ambience of doom, distortion, and directness on the two tracks. While the pair share a similar core, as they were recorded back-to-back in one take, the tracks’ individual evolution place each in a compelling position.

On “Blackout“, the track plays with silence and the anxiety it induces, preparing for the weight of “Sex to White Noise.” It is a slow, timid burner, but leads with possibilities among its measure for measure lines (“I’ll breathe you in/ and smoke you out”) and Clayton’s bewitching tone. Pauses become crucial when crafting the contemplative mindset for consequences of different scenarios, in this case of people who no longer serve you well.

Of the two singles, this track is appreciated for its slow and dreamy tempo after hearing its companion. The gaze on “Blackout” is organic and sets the mood for “Sex to White Noise.” It is here we can truly appreciate the softness and control of Clayton’s vocals.

Heavy distortion, reverb and doom wraps you in an hard embrace, which is easy to surrender to when wanting to feel anything, as the song confesses. There’s a slow rage on this track that craves for something more, something that “Blackout” couldn’t deliver for this particular ache. The track’s structure is brilliant and sees the undertone of drone metal bleed from guitar to the rhythm section.

“These two tracks have always come as a pair, the early workings of ‘Blackout’ launched into the riff from ‘Sex To White Noise’ but it became apparent that it had legs to become something quite remarkable in its own right,” shares Clayton.

“‘Blackout’ is about people in your life that you know are no good for you but are hard to give up, whereas ‘Sex To White Noise’ is about trying to find a connection that makes you feel something when you’re feeling really numb. If you’ve ever been on Prozac you’ll know!”

Together there are new accents and feelings that these tracks produce, one being an introspective look at consumption; what we can’t have enough of, and what doesn’t give us enough. Separately, they fight off two enemies and are breathable in their space to do so without an accompanying sound.

The double release ends the band’s year on a strong note and sends a promising look of shows and future releases for 2023. 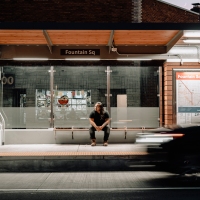 #NewNoise: Drenched in love and gratitude, R&B singer/songwriter Brianna Knight shares a glimpse of adoration towards her partner and the beauty of Black love on “Holy.”
Nadu reprises a juvenile angst and confronts another in a moment of growth on his latest single “What Kind Of Man.” The Los Angeles-based Bangladeshi-American artist has been making peace with younger versions of himself and follows the 2022 single “Good to Me,” both taken off the artist’s upcoming LP, '16,' due March 3, 2023.
DJ Le Josh and multi-instrumentalist Ghaliaa team up on the single “3alli Sawtak” for an invigorating wash of indietronica inviting all to “raise your voice.”
#AlbumReview: Metal Postcard Records shares the 16-track compilation album 'New No York' featuring Neon Kittens, Salem Trials, Lucy & The Drill Holes, and clickBaiters.
SUN is an artist who continues to excite and utilize the beauty of heavy metal for a wondrous exhibition of liberation and unspoken reciprocity between listeners, as heard on the latest EP, 'Brutal Pop 2.'
#NewNoise: Long Beach’s Cosmic Kitten share their newest surge of frustration, “All The World,” ahead of the release of their self-released album, ‘Laugh of a Lifetime’ due May 5, 2023.
#ICYMI #NewNoise: Tianna Esperanza shares her latest powerful single “Lone Child” featuring Valerie June ahead of her long-awaited BMG debut album, ‘Terror,’ due February 17, 2023.
💙 https://988lifeline.org/