Los Angeles-based artist Annabel Lee is a captivating and bold sentiment of anger that shows no sign of slowing down. With an early take to music and impressive resume to boot, the singer-songwriter arms herself with a fury of keys to the likes of the grunge fusion heard in the mid ’90s. Awards and mentions aside, the artist’s track will do more justice than simply regurgitating bio lines.

Annabel Lee’s latest track “Make Out” exemplifies the balance of alt-pop with the grit left on the underside of an angry combat boot. An animalistic lust protrudes in a cinematic fashion, flaunting the artist’s artful build. The song treks through thoughts of not wanting anything else than a touch, and craves for a feel with no strings attached.

Bursts of jazz liken the early verses to a lounge environment, eventually bleeding into a more commercial soundscape. It’s a sprite burst of frustration with Annabel’s multifaceted vocals fanning each flame. At the end of the three minutes, “Make Out” succeeds in its passionate growl and cabaret-influenced pop.

With a growing presence in the LA community, the artist is collectively merging current scenes for an aesthetic all her own. 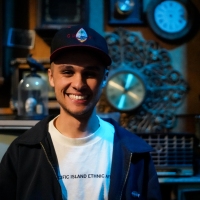 #NewNoise: Accompanied by rich vocals and paying a generous ode to upbeat ’70s funk, Micah Manaitai’s latest "Månnge’ Hao" track recalls the improvisation of a backyard jam session. ☀️ “This song is the very least I can do to honor the village that raised me — both in Guam where I was born, and in St. Louis, where I grew up,” says Manaitai. “It’s celebrating the love of your parents, grandparents, your whole familia.” 📷 : Asha Monecc
#AlbumReviews: Zilla With Her Eyes Shut orchestrates soulful wisdom and darkness on her self-titled debut album. ✨ She is surrounded by narratives endowed with sentient attitudes – facets of her personality take solid shape as we gather a backstory. One character, “The Sleepwalker,” counts her blessings as she manages to navigate the world while avoiding the dangers of a waking life. 💫 She takes this advantage, gearing up to tell twelve stories of examined human experiences as she surrounds herself with creatively tweaked samples of worldly sounds. . . . . . #uk #london #zillawithhereyesshut #newmusic #debut #selftitled #accidentalrecords #whisperwhisper #electronicpop #wonkypop
#Videos: As the quarantine can prove limiting for some artists, BEJO takes “Frida Calo” as an opportunity to share his creative pursuits accompanying the track with his vivid illustrations. ☀️Sharing on his Instagram, “Hipi Hapa return pa amenizar la cuarentena,” the artist expresses “let’s soothe this quarantine.” Bejo brings listeners an instrumental heavy track produced by emerging urban producer Sandro Jeeawock. 📽️ Dibejo x Rosahacecosas ✏️ : Mariana Martinez
#NewNoise: Miami-based bands Las Nubes and Palomino Blond come together and share their new split EP via BuFu Records. The 4-track offering gives listeners an ample offering of alternative rock, nostalgic distortion, and grunge.
😒...yes. #cabronavirus [🎨: @throwbacklounge1 ]
In response to the global effects of Covid-19 on the music community, Bandcamp announced yesterday that the platform will be waving their share of revenues this Friday, March 20th, (from midnight to midnight PST) so as to give artists the entirety of all profits made from music and merchandise sales. 💕During this period of social distancing and quarantine, as venues close and many artists struggle to make ends meet amidst gig and tour cancellations, now more than ever is it time to rally behind our beloved local and underground community. So if you’re able and have a little extra cash, show your favorite artists some love on Bandcamp this Friday - buy an album or some merch, and your money will go straight into their pockets! 🖤 GUM #supportlocalartists #bandcamp #bandcampmusic #cabronavirus
#NewNoise: As our world is currently experiencing a pandemic, it’s difficult to find a sense of direction or groundedness among these unsettling events...⚡️As we continue to cope with the unstable days ahead, only earlier this year can we recall the wildfires that consumed Australia in a hysteria of fire.⚡️ Informed by the dangers unraveling among us, 44 Ardent returns with new single “f i r e s” hoping to raise awareness and bring a compositional portrayal of these tragedies.
Hope we’re all staying safe...and sane. Much love 🖤🐱 #cabronavirus
Advertisements
Advertisements