The El Rey Theatre held a culmination of angst, love, and anticipation in the form of gritty blues and rock n’ roll at the feet of Black Pistol Fire and Thunderpussy. The combination of the two acts were a fiery fit of perfection. Regardless of who you were there to see, the room kept bodies at bay of the explosive behavior each act naturally exuded. The dim lit theater didn’t suffocate and dazzled at the beck and call of the bands’ movements making it an ultimate favorite of the year. As rare as it is to be indulged from start to finish, the night carried a genuine love for classic rock.

Thunderpussy kicked things off a little bit after 8:30 p.m. and set the tone with their signature aurora of ’70s rock. Refusal to leave for a drink to not lose my spot became a war inside my soul, but eventually was not even a second thought as Whitney Petty emerged on stage. Quietly appearing, Petty began to strum her Les Paul with a bow, in a silent and ominous factor that readily built anticipation.

Molly Sides effortlessly appeared on stage with the most refreshing confidence and never ceased to lose steam throughout the set. Blessing the stage with a righteous pair of pipes, Sides extorted her body to every crunchy pluck by Petty, both intoxicating when seen together. Leah Julius beamed on bass and hung tightly akin to new drummer Lindsey, who rounded up a seamless rhythm section. Between roaring favorites such as “Speed Queen” and “Somebody to Love,” the quartet intertwined heartfelt ballads, such as “The Cloud”, which Sides noted as her favorite. Banter between stage and crowd spoke highly of the organic magic of the band, while profound lines by Sides carried on after the show: “Wish we were building longer tables and not higher fences.”

One cannot stress the complimentary exhibition in sound and performance that BPF and TP both portrayed. The pit began to fill up more as Austin-based duo Black Pistol Fire armed to take the stage. Hard-hitting, garage rock instantly spewed from the spacious set-up which allowed singer/guitarist Kevin McKeown to run rampant without fear. McKewon bathed in his own sweat after each chord scuzzed from his fingers and crept in the fills of Eric Owen’s drumming. The duo’s raw concentration of blues and rock refreshed the night of Los Angeles and is an act that must be witnessed live.

McKeown continued to excite and drove his body off stage, surfed the crowd, and sparked a buried, and lost carefree demeanor from us all. Picking along tracks from their latest album, Deadbeat Graffiti, such as “Bully” to new single “Pick Your Poison” and a cover of Childish Gambino’s “Redbone“, BPF disintegrated worries with ease.

Check out the photos from the night. All by Dulce Genesis Balandran for GUM. 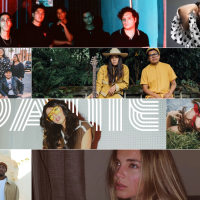 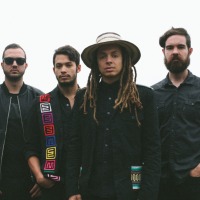