What started as a kickstarter campaign has come to full fruition for Las Vegas musician Sonia Barcelona. Backed by an array of talent throughout the Vegas area, the live action and animated video for “Violent Water” is a masterful cut of imagination. The track not only hails the artist as the skillful musician and songwriter that she is, but flips the narrative throughout the video from the typical damsel in distress syndrome to a heroine who doesn’t need to sacrifice affection for power.

The nostalgic factor and modern portrayal of a classic moving picture cues to the playful and fanciful vision of the entirety of the team. Directed by Danny Chandia, with backdrop paintings by Matthew Murphy and filmed at SPCKRFT Studios, the intermixture of realitisc and false textures grip a viewers attention immediately. The filmstrip burns and rawness breathe reminiscent features to the likes of The Smashing Pumpkins’ “Tonight, Tonight” — which is never a bad thing, seemingly fit to the track’s distorted guitars — and is easy on the eyes due to the video’s color grade.

Tangled in a nautical setting, Barcelona makes her appearance as a golden mermaid gripped in adoration by a sailor — pulling inspiration from past romantic fables. As disaster initially strikes, unaware to Barcelona, the artist continues to delicately croon of a magical and “magnetic” pull, — “Oh, Violent Water / Oh, it’s how you caught her / Don’t stop it’s what I want, it’s what I want” — that is shown sweetly in various scenes.

Regardless of mythological reference, whether it be Greek, Roman, or Hindu, the story of a deity holding the classic 3-pronged spear (trident) has typically been cast by a male. Reinventing the narrative, Barcelona takes hold and battles aquatic beasts in a dynamic rush of visuals. Guitars wail through the final climatic scene and Barcelona’s presence, vocals, and overall composure is enthralling from beginning to end.

What stands alone as an addicting alternative-rock cut, opens the door to a lovely take of a youthful exploration that should never die out as we age. 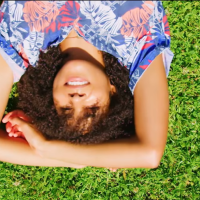