Chilled to a loving crisp, Brighton artist LUME returns with a dreamy sense of hope, it seems impossible to not find joy after the first listen. Taken off her forthcoming EP, Edge Of My Seat, due later this year, the title track breathes a lost essential that swarms anyone who is chasing their dreams. Collaborating with Maths Time Joy, “Edge of My Seat” not only empathizes with an untold anguish but immediately counters it with a divine production.

“The song imagines that there’s a search party or rescue mission out there looking to pull us out of the mud,” explains LUME, who wrote the song after hearing that a string of her musician friends were struggling and contemplating quitting.

The serenity created by LUME and MTJ is not only optimistic but becomes the redemption that was originally sought after. The controlled sliver of electronics rests easy alongside LUME’s angelic vocals for a blissful cut.

“It’s a hopeful track, with the idea that we’ll all find contentment and clarity at some point – with whatever we choose to fight for, or let go of. At the time I also had this overwhelming sense that everything was going to be fine and I felt excited for us all. And that actually, maybe I was their search party in parts of the song, and they were mine.” 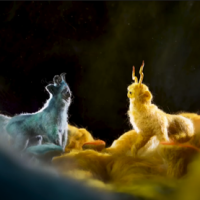