The romantic allure of boleros have been instilled in Latin America history since its origin from Cuba, to its popularization in Mexico during the 1940s, specifically the “Golden Age” of  Mexican Cinema. As the genre declined and resurged once more decades later, taking on many fusions such as pop, a nostalgic want appeared for the romantic language that bolero’s naturally spoke.

Los Angeles trio, Tres Souls, have embarked on a mission to preserve the bolero genre and introduce a new generation to the romantic threads on their debut album, Boleros Made in L.A. Los trios románticos are led by Roberto Carlos (rhythm guitar & brother of Pepe Carlos from the Grammy-winning band La Santa Cecilia), Rocio Mendoza (lead vocals), and Jesus Martinez (requinto), who have been working for about a year on their debut which was funded by a Kickstarter campaign.

Their 10-track introduction portrays original pieces and reworks of classics from Mexico and various Latin America countries, which maintain the spirit of the bolero while showcasing their own distinct sound. Mexican cinema samples are heard throughout the album, as the opening tracks distinctly pay homage to the era in a contemporary fashion heard on “La Luna Eres Tu.”

Mendoza’s delicate vocals hum across the classical guitars and bright plucks. Heavily sedated with love, the single is validation how the trio can fuse their modern mindset within the timeless genre. Inspired by Talib Kweli’s “Beautiful,” the track nods at love by the same notions the moon attracts the ocean and refreshes the guitar accents with sound clips from the 1943 film, Maria Candelaria.

“Amor Mio” showcases the trio’s beautiful harmonizing skills and dreamy guitar breaks, while another original, “Anoche Yo Te Vi” can be seen as a more traditional take of the genre. “Sabor a Mi” also stays in the lane of tradition as the trio skillfully portray Álvaro Carrillo Alacón’s original lines with a lush resonance.

“Aunque Me Cueste La Vida” keeps the percussion similar to the likes of Cecila Cruz’s version but softens the guaracha traits. The track’s breaks are more centered on the “harmonic vocabulary,” wrapping around the trio’s reharmonization of the melody.

Of the covers, one of the most distinct change is heard on La Sonora Dinamita’s “Que Nadie Sepa Mi Sufrir.” Straying away from the original cumbia rhythm, Tres Souls slow the pace of the track, building a folk ballad, while replacing brass horns with a flurry of technical plucks. Another pleasant surprise is heard on The Temptations’ “My Girl” which sees a folk-esque intro and translates the soulful core upon strings. Mendoza’s vocal runs and control standout on this track and beautifully close the album.

A captivating trait of the album is the cohesiveness that pulls a listener from past to present. The selection of covers, running samples of various Mexican cinema, and restructure doesn’t only honor the genre but a vast amount of history and influences that are wrapped in Los Angeles. From soul that was bestowed from Motown in the 60’s, to folklorico that epitomized each culture of Latin America, Tres Souls recognizes these essential sounds and celebrates respectfully on their debut album.

2 comments on “Tres Souls’ Romantic Debut to Preserve ‘Boleros Made in L.A.’” 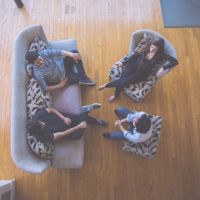