“Fuck around with LA tonight. Gonna get me pregnant tonight. Imagine that phone call to my wife,” casually stated Atmosphere’s Slug. Coming in with a rising sense of wisdom, jokes, and a resounding afterthought of what you will leave behind, Minneapolis hip-hop duo, Atmosphere, flawlessly portrayed their legacy on stage in Los Angeles, Thursday night at The Novo.

Taking along DJ Keezy, The Lioness, and deM atlaS — throughout the duo’s 35 trek in support of their ninth studio album, Mi Vida Local — the night saw a generational progression from a younger to older crowd who all shared a similar notion of simply having a good time. Trailing off an aged heart of Atmosphere’s last album, the ideals of the tour and night reminded us of the duo’s mortality and all they leave within every listener.

As the venue began to fill up with DJ Keezy’s reportorial of classic hip-hop cuts, the night began with The Lioness emerging on stage with a humble confidence of conscious rap. She played with the audience’s emotions, knowing when to pull and push, delivering an assortment from her recent album Greater Vision.

The set’s silky productions were followed by an expressive stage presence, held on by The Lioness’ delicate care for each syllable being thrown out into the crowd. Slowing down tracks such as “Close Call,” The Lioness played with her flow as she always held the crowd’s energy in mind. The Minneapolis native tied every line with her album’s theme, telling the crowd to always be true to yourself, and to “speak your heart, speak your mind. Talk yo shit though.”

Immersing into a cinematic performance of rock and rap, deM atlaS’ set was a collision of worlds. Taking the stage as the devil should appear, and theatrically setting the scene against an acoustic guitar, the opening threads of “Tomorrow Party” broke the venue’s bleak confinement. deM atlaS smoothly transitioned from raw and gritty vocals on “Gratitude,” to embellishments on “Music Man,” and back to pragmatic rap lines that pulled elements from his debut album, Bad Actress.

Cutting the stage with dance moves, explosive body thrusts and a spellbinding charm, deM atlaS was a welcomed kick in the head that mimicked the enthrallment of an adolescent’s first glimpse of a punk and rap show. Breaking the daredevilry, deM atlaS asked, “Is it alright if I play some happy shit right now?” before breaking into the blissful track “Perfect Day.”

As Ant and Slug made their way to an eager crowd, the night echoed the same retrospective sentiments of the duo. Kicking off the night with newer tracks from Mi Vida Local, long time fans met with the inspirational charge of newer bodies who stood in awe of the self-made Rhymesayers logo that peaked its way on stage.

Beaming with an astute light, and rocking a revived stache, Slug garnered the crowd’s spirited cheers and reverberated it right back. Cherry picking through beloved albums, the duo weaved from “Say Hey There,” “Onemosphere,” to the cherished, “Fuck You Lucy” before diving into an older catalogue.

“I see a bunch of fuckin’ old people. Don’t get me wrong, there’s a couple of young studs…but for the most part y’all some old motherfuckers,” said Slug to a cheering crowd. “No, no, no, I’m not complaining, I’m just observing. I’m fuckin’ old too. And you know what? To keep it fully fuckin’ transparent, I’m just fuckin’ happy that there was enough childcare available to accommodate.”

To appease the age of the crowd, and the cheers that held anticipation, Slug continued. “I’m gonna do some shit that’s so fuckin’ old if you watch the people next to you, you gonna see some people try to pretend like they actually know this shit.”

Nostalgia held true for the majority of the set as Slug danced from lines on tracks like, “The Abusing of the Rib,” “Sunshine,” “Reflections,” “Modern Man’s Hustle,” and “Guns and Cigarettes.” Changing lines as he seemed fit, Slug manged to make the oldest tracks feel fresh, embracing a light disposition, noting that they were now bigger than syphilis after asking the crowd if they ever had an STD, which surprisingly, wasn’t that many.

Keeping the venue’s vibe constantly high between the humorous mind of Slug, a shift came towards the end of the night. Lemons‘ tracks slowly transitioned towards the melancholy likes of “Virgo.” A conception of the length of man and contemplation, which graciously echoed on their newest album, seemed to strike a nerve.

Slug’s poise and intent weren’t of a rehearsed rendition, but of an old friend telling you one of the secrets of life beneath the track’s blunt line: “Like fuck it, you can sacrifice me to the weather, if you promise that you’ll let my songs live forever.”

“Little Man” continued the introspection, blessing the night with only two verses, before the ode to past loved ones echoed on “Yesterday” and the rare deity of “God’s Bathroom Floor” came in its entirety.

The encore saw a homecoming warmth on “Always Coming Back Home to You” and a return on stage of deM atlaS and The Lioness for the track “Drown.” LA’s own Evidence made a surprise appearance, while the night was wrapped with a full stage of Rhymesayers on the more aggressive version of “Trying to Find a Balance.”

Reminding us all that they live inside our energy, Atmosphere’s theme this time around lingered longer than usual. Rightfully fit to Mi Vida Local, the duo’s one of a kind charm and perspective made this one of their best sets to baptize Los Angeles. 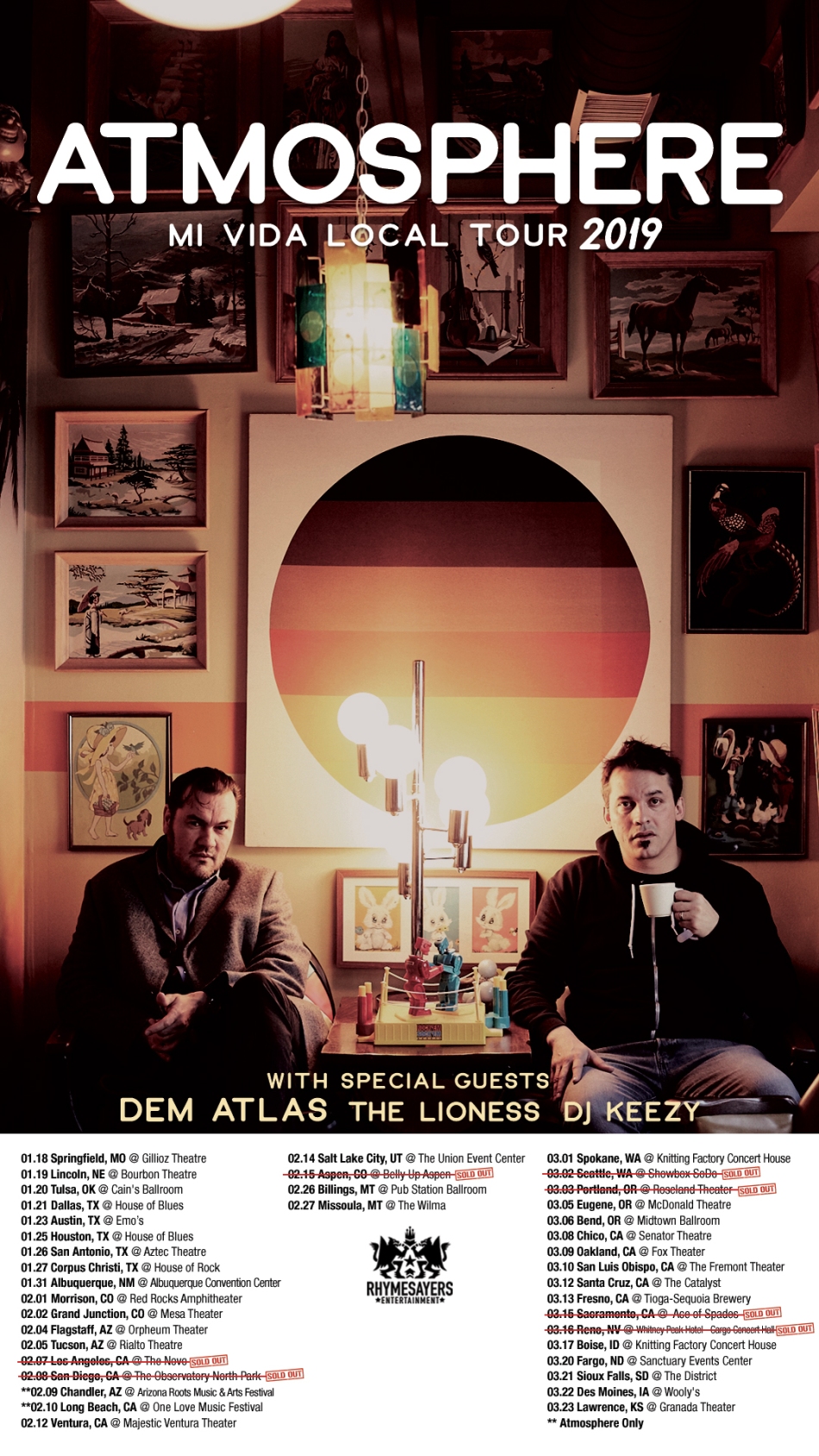