Self-awareness is the first step towards any monumental change. For Swedish producer, August Landelius, his introspection and realization led to a wondrous return, after his three year hiatus, with the new experimental slice “All You Can Eat.” The last time we heard of Landelius was in continuation of his 2015 debut EP, Float and caught the attention of many for his precise ear and experimental production. The producer’s latest offering is an obvious result that time was well spent in sound and personal theory.

Emerging from an ambient stance and skewed interpretation of trip-hop, the opening minute of “All You Can Eat” lulls one into a false sense of security. A honeyed result continues to drip into Landelius’ dreamy, low vocals which delicately cascade over the slow tempo. Easing into a electronic, R&B rhythm, Landelius transitions with ease and calls for multiple replays to catch the build.

Despite the easy going beat, atmospheric soundscape, and bountiful bass lines, a dark and somewhat bleak undertone is felt within Landelius’ tone and experimental layers. Muddling a dispirited notion through inaudible vocals, the sonic deconstruction mirrors the artist’s self-evaluation.

Immediately plunging into the theme of the track, Landelius explains: “’All You Can Eat’ is about the specific social group I’m from, let’s say advantaged, western, freshly ‘woke’ young men. I’m a very privileged boy from Sweden and white male Swedes from where I’m from are used to complaining about all kinds of small things. I was extremely grossed out by myself and all my whining about useless problems. Not that I loved myself before, but now I almost felt like I had lost my identity, which is really pathetic. The thing is I couldn’t really help being a bit sad even though I now really, really understood how privileged I was.”

Arriving with a new mindset and exquisite formation, “All You Can Eat” rides a multitude of genres, moods, and results in a soulful narrative that isn’t fair to simply label as “electronic.”

The single is the first piece of new material the producer has unveiled from his forthcoming debut album, set to arrive in 2019. 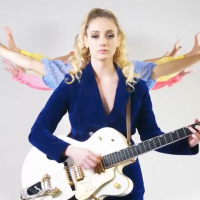