Billy Qween and Billie Qween return for their second installment of tragic-pop and levitate their stance as the noise-gazers in anonymity. The LA duo, simply known as QWEEN M8, pick up where they left listeners — in terms of essential dreaminess — and continue to slice audible dimensions off their repertoire. Playing With Ghosts cleverly progress their paced introduction with a slightly aggressive tone than previously heard, which flourishes in dissonance noise and electronic feedback, displaying emotive shades from the pair. Dubbing this series as The Royal Trilogy from the masked royals themselves, the three part EP assortment will conclude by early 2019 and hopefully unmask more of the illusive entity.

Perfectly placed in limbo, the EP’s title track, “Playing with Ghosts,” stands out as the second wave’s strongest track. Harsher around the vocal delivery and propelled with an angular production, the looming layers of electronic collision seems to be the aroma of tragic pop, which made the first offering so enjoyable. Whereas “Apartment Song” kicks off the EP with a scratched yearning of romance drizzled beneath hazy guitar chords and overall balances the shift in tone on the project.

Posing a cinematic threat of delirious electronic throbs, “Total Strangers” pulls from these industrial elements briefly but is brought to full capacity on “Forgive Me.” Crossing somewhere where Shirley Manson’s intent on “#1 Crush” meets Trent Reznor’s “Closer” to wash all sins and mindlessly dream, “Forgive Me” is found. Honey-eyed vocals cling to the effortless melody and captures an intangible feeling.

“Our philosophy is to write the music in the moment and embrace the imperfections. We try not to over write,” explains Billie Q. “The lead vocal on ‘Forgive Me’ was actually just one single vocal pass. I had the words in front of me and we captured the melody that came out in that take and that was it. It’s very liberating to just go with your immediate gut when writing… then just live with it.” 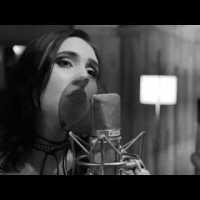