Captivating through numerous singles released this year, Lui Hill unveils his self-titled debut album for a introspective outlook on the journey, the ideals of “home,” and the threads of life. Propelled by a collective composition of neo-soul, Hill’s offering is driven more by polished structures and potent songwriting, cultivated from his musical upbringing and various means of self-expression. While each track on the album can stand alone with its own story, cohesively, Hill’s marking to the world is that of a spark that is within each human awaiting to be stirred.

Disclosing the array of misfortunes that occurred in Hill’s life, the mode to deal with this weight was to leave to South Africa. “My first wish was to clear the table of difficulties with a plane-ticket, and head for new surroundings,” says Hill. “When you do that, you escape your toxic environment, and this helps you start to breathe again.” A prominent factor that is heard throughout the album as Hill displays the worry and finds himself revived.

The album’s opening track, “5000 Miles” speaks on the plane ticket and Hill’s words of wisdom passed from his father. “My Father always told me, how important traveling is,” says Hill. “It helps you understand how beautiful and varied this world is, and its occupants and cultures. It helps you stay flexible and open-minded, and to get a different, more focused view about what we have and what we lack.” Intangible textures fill the track with a hopeful atmosphere and gorgeous production as Hill cascades each verse and truly warms up the album. “See The Light Again” immediately picks up momentum with a disco edge, provided by the flaring synths. The track wraps a listener in one’s mind, picking towards the other side, and dancing on a wave of upbeat grooves.

“Revolver” is a darker stab as Hill statically approaches on the waves. Similar atmospheric compositions create a hurtful past noting the heavy keys that build the track into a subjective state of mind before becoming in its own skin of a pop-fusion. “The Storm” and “Words Become Worthless” are both somber and contemplative for the first half of the album. “The Storm” sees bright guitar tones in the early stages, before booming into an electric production, as “Words Become Worthless” takes a soulful and contemporary style. This track is a realistic high point on the album though, and dives further into Hill’s state of being through constant traveling and heartbreak. The track budges at the ideal of wanting more as altered horns peak in and out, creating an abundance of heart on this track. Hill’s low melodic tone takes each line to reflective point for a listener: “All words are useless if your heart is beating next to mine.”

Perfectly placed, the minute interlude “Home,” pauses from the heavy amount of emotions heard thus far. Sampled lines of dialogue — with Hill muddled in the background — implement the concept of being home, especially for one who is constantly on the move. Hill’s sentiments are more profound on this simplistic intermission and aids in the overall understanding of the album. “Ancient Dust” kicks off the second half, revisiting the electronic-soulful single. Nostalgic keys chime with an sustainable worth of bliss over Hill’s sharp lines,  “Are we just too bad inside / to do the good things right? / Made of dust belonging to / the ancient time.”

“So In Between” bounces from lines of “Words Become Worthless” once again needing more and this time addressing all factors and Hill’s state of limbo. The following track, “Muddy Waters,” is a bubbling, and driven track, circling around a more positive outlook. Making it way to the end, fittingly comes the track “The Fall.” Slowly bleeding into full form, the first minute is a slow hunger that seeks fulfillment. At the cost of loss and more contemplation, “The Fall” takes a stronger electronic production and a cooler atmosphere where it seamlessly transitions into the closer, “We Don’t Die.”

“We Don’t Die” completes the journey as a 6 minute, cinematic ballad. Hesitant synths and Hill’s vocals fill up the track for the first 2 minutes as a deafening silence rides the sands of time for several minutes, raising anticipation. Meditating on the silence, the tracks continues with sinister keys and lull. Reversing playback of dialogue, the ending stirs curiosity and reverts the track’s cycle, justifying the track’s intent that no one really dies, if you keep telling their story.

Stream the full album on Spotify. 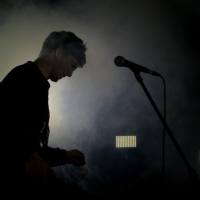