La Tocada fest is back celebrating its 5 year anniversary, this time relocating to Los Angeles at the Historic State Park and being the first Latin Fest to take place since the renovation by the grace of Live Nation and Frias Entertainment. The event is anticipated to hold up to the standards which the fest has displayed since day one, featuring art, luchadores, and of course the primer gathering for Latin Music. This year the momentum continues with Café Tacvba, Panteon Rocolo and Jesse & Joy. To christen the event we got the chance to chat with Mexican artist, Caloncho, who will be closing the Hollywood Stage at La Tocada.

Welcoming me on the other end of the phone, Óscar Alfonso Castro, better known as Caloncho, excitedly began to speak. “Pero, si digo algo malo, recórtalo,” he playfully responded to my request of conducting the interview in English. The Latin Grammy nominee has had quite a successful resume and steady growth since his first debut in 2011, capturing audience’s worldwide with Fruta (Vol I & II), and Bálsamo. Not to mention collaborations, to the likes of Chilean artist and La Tocada feature artist, Mon La Farete. Unable to point out a favorite collaboration, or any ill thoughts on past work, Castro simply explained how “albums are like pictures,” positively acknowledging growth and purpose at each point in time.

Finishing up shows throughout Texas, Peru, to Mexico, Castro returns to the U.S. in Los Angeles and expressed an array of excitement for performing with his full band for the first time, noting that the performance is “going to be a celebration.” Possessing a musical style that is very tropical, smooth, but still built from a rock composure, Castro expressed his personal influences came naturally, from folk to reggae, admitting though an intimacy on all of his tracks.

With new music on the way that are ripe with flavor, I began to pick Castro’s brain once more on his music, and the intent he’s aiming to get across. Slyly and without hesitation, Castro mentioned his 2017 album, Bálsamo. “This is what I’m trying with my music; the power of music,” referencing the 13 track spectacle. Diving further into the tracks a variety of emotions are revealed but each with a grand outlook on life. From the title track’s messaging of being massaged with music, to the happy-go-lucky musings from “Optimista,” the rhythmic soundscape of nature encapsulates Caloncho’s work. The other side of reality does hold truth, such as the short ballad “No Me Caigo Bien” and introspective somberness heard on “Hednoista” — assuring Castro’s intent lies within his dismantlement yet once again, his reassuring outlook of living.

“‘Amigo mujer’ … it doesn’t mean you’re a man and a woman at the same time. In the lyrics, I mean I’m telling my wife, in this case, I’m telling her I’m your friend. Soy tu amigo, mujer. But since its like a working amigo mujer, we decided to make a video where we can say gender is a construction and its your construction and it doesn’t matter what people think about it. We are in a free world — a “love” world — where you can express yourself and sexuality as you want. That’s why the guy and the girl are changing spots in the video. There’s a drawing of masculinity and femininity and they just change sides and feel themselves.”

Life wouldn’t be complete without fruit, as any Caloncho fan would know a reoccurring and signature blend of fruit appears throughout Castro’s discography, whether sour or sweet. As many have asked before, I needed to pick once more for another meaning. Between some laughs, Castro simply responded, “I just like fruit,” crushing all my passionate hopes within produce. As refreshing as the breezy demeanor his music carries, and insightful lines to hold closely onto later, Castro left me with his intent; “Music has the power to the people.”

Closing with his warm tone, Castro once more needed to extend his gratitude: “I would like to thank all the people in Los Angeles that listen to my music and are attending La Tocada. It’s going to be a great day [and] it’s all about enjoying time, enjoying music, and the power of it.”

1 comment on “La Tocada Fest Artist Spotlight: Caloncho and the Power of Music” 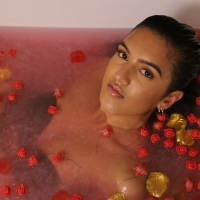