Derived from the belly of repetitive toils in life, the collective that continues to blend contemporary and visionary feats of audio, EMÆL, welcomes us to their savior from the mundane on “Yellowtail.” Taken off their successful debut album, Glasswork, the track’s skewed signature and classical, neo-funk stylings hail from drummer Joris Hoogsteder’s 15/4 groove, to a sweet melody sung on the streets of Mexico that was captured by frontman Emmanuel Ventura-Cruess. The visual counterpart, directed by Gibran Rubio, explores this audio soundscape of freedom while stripping down the bare necessities of life towards a sense of individuality.

Rubio’s direction sees the band — Ventura-Cruess, Joris Hoogsteder, Alyssa Belle Cantal, Daniel Kristoff, and Michael Womack — in a standard assembly line deprived of any sense of self, redundantly folding the same line over and over. Cantal’s hopeful vocals emerge and knit closely alongside Ventura-Cruess’ for a sweet essence of harmonizing. Stirring around a very minimalist and poetic writing stance, carried by the innocence of a child, the track circles around a yellow tail one would see dangling at the end of a kite. Clinging to this striking and vivid element, the video cruises between the acceptance of contentment to wanting more, as each member lulls into their safe haven of dreaming.

“I’ve never been one to dream a dream that wasn’t mine,” takes the track to a darker tempo by the cello-driven break. Cradling onward a symphonic spotlight, “Yellowtail” emerges into an expansive composition, wrapping each line in an aroma of jazz, hip-hop, and neo-soul. The video captures and instills the notion of not only flying our own kite, but holding on to our own yellow tail that allows flight, and keeps us dreaming a little longer.

Stream Glasswork and be sure to catch the So.Cal locals on tour. 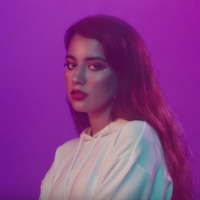 Memory Milk spreading love 💕 🌸at Los Globos 📷: Janette
Happy V Day 🖤🍻GUM loves you, well kinda.🖤 Don’t listen to Morrissey alone tonight. #happyvalentinesday #thesmiths #500daysofsummer
#Discover: Los Angeles-based multi-instrumentalist, producer and fashion designer, Tatiana Hazel, shares her latest indie-pop cut “Hasta Que” (As Long As), co-produced with Drew Polovick. What comes as a preview for the artist’s forthcoming EP due this spring, Tatiana brings to light what needed to be put to rest for a future to come alive.
#NewNoise: “Everyone’s been broken from something. You smoke some weed, you fall in love, they turn out to be a fuckboy, you’re with someone shitty, you break up, you ghost them, you still love them, you resign, you meet someone new and there’s hope again.” 💀 Stream Raquel Lily's latest single "I'm Leaving" taken off her forthcoming debut EP. The track is a soulful classic nod of R&B, great groove fills, and speaks on a timeless strength of walking away.
Paris-based artist Hendrix Harris shares his latest track "Should I" taken off his debut EP set for release in March. On “Should I,” Harris explores a lighter shade of funk, washed in a tropical soul as the artist floats between languages.
🌤Jane Astronaut “Here it Comes” ☀️Tunes for the night of @beverlysalas first solo art show @bookmanorange 🌈
#NewNoise: London’s five-piece art-rock band, Post Louis, share another single from their upcoming debut, 'Descender,' set for release February 28, 2020.❄️ The urgent disposition of “Winter Pollen” portrays the outlook of a woman effected by the Me Too movement. ❄️ It’s a scathing whisper that has been bitten by an exhausted hope, fit to the track’s distortion, rhythmically askew placement, and eccentric layers.
"Do you, Do you, Do me!" 💞 Ah, love is in the air. Manchester punks, Aerial Salad, are the indifferent voices in our heads that are trying to figure out life and burst with vitality because they simply can. 💘Stream their lead single "Romance?" from their forthcoming LP, 'Dirt Mall' due March 27 via Roach Industries/Plasterer. 🎥 : Kieron Jordan
Advertisements
Advertisements