The music trade show giant — known better as The NAMM Show — took music lovers, buyers, and merchants through 4 days of pure bliss at their Winter Show residing at the Anaheim Convention Center, also displaying the new ACC North Wing and Arena Plaza Stage. Besides the latest gear from notable brands– such as the 9 neck guitar by Fender or Steve Ferrone’s kit used on the last Tom Petty & The Heartbreakers tour on display outside of Gretsch–  customization seemed to swarm the levels.

Mic clips were colored, ear pieces were molded to perfection, and questions of the future intertwined the next step that crept throughout workshops. A3E Session, The Future of Sensor Tech, lead by Doug DeAngelis picked at the mind’s of Keith McMillen, Loki Davison, and Jean-Baptiste Thiebaut of Roli, BeBop Sensors, and Poly Expressive, who discussed endless possibilities through sensor integration. With only so many sounds that could be heard and rearranged, technology added new hope of sounds not yet heard, continuing to push the envelop of emerging artists.

Aside from The 33rd Annual TECH Awards hosted by Demetri Martin, performances by OK GO, and multi-platinum recording artist Andy Grammer, for Saturday’s 2018 Imagine Party hosted by the epitome of funk, Bootsy Collins, independent artists added the genuine excitement. In a full circle span, hailing to NAMM’s montage of The Music Begins Here, independent artists who performed the various stages all possessed a sense of heartfelt love during their performances. An essence that immediately became receptive at any stage or crevice inside the beast of The NAMM Show.

Happy hour resided daily in the ACC North Wing as DJ’s, such as Little Boots, DJ Puffy, and Justin Jay, blessed the Pioneer Arena for an hour in between sessions with a disperse of energy. Yet, as each day and workshop ended, one of the real beauties of The NAMM Show emerged from the community that comes alive towards the end of the day.

For 25 years the drum circle brings individuals with or without a show badge to Palm Court to listen, unite, and have the chance to touch the very abstract notion of sound. Reiterating the circle’s open philosophy, which states “you don’t need to be drummer to participate”, allows for a mass of no judgement and an amorous chemical release. Usual attendees swarm hours early to help prepare for a tradition that keeps NAMM’s technical aspect youthful and invigorating. One thing continues to stay the same as each show slips through the years: dreamers start here.

Ecuadorian-American singer-songwriter brought folk and Latin-pop gracefully to the Hilton Stage. Armed with her band, and at times only her guitar, Ontaneda’s presence, melodic structure, and story telling abilities melted through her honeydew vocals creating a tranquil environment.

The Brook & The Bluff 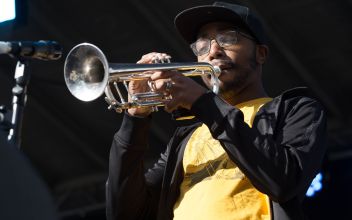 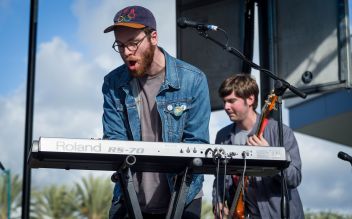 Birmingham, AL lads truly blew us away with their eclectic range of blues rock, melodic harmonious breaks, and pop cascades. Taking notes of strong songwriting to the likes of a Southern inspiration ballad– or Mad Men — The Brook & The Bluff kept their whole performance fresh, deeply rooted with a sound all their own.

One of the best moments, if not the best moment, would be the Women at NAMM happy hour celebration on opening day. Through the 117-year span of The NAMM foundation, Robin Walenta became the first woman chair of the organization. The Ballroom at the Hilton became a roaring celebration of empowerment. Walenta took the stage to emphasize the “need to support women” and assuring how we will “advance this industry” through her own personal mission. Featuring the only all female cover band of Queen — SF’s The Killer Queens — the event connected and celebrated women in the music industry.