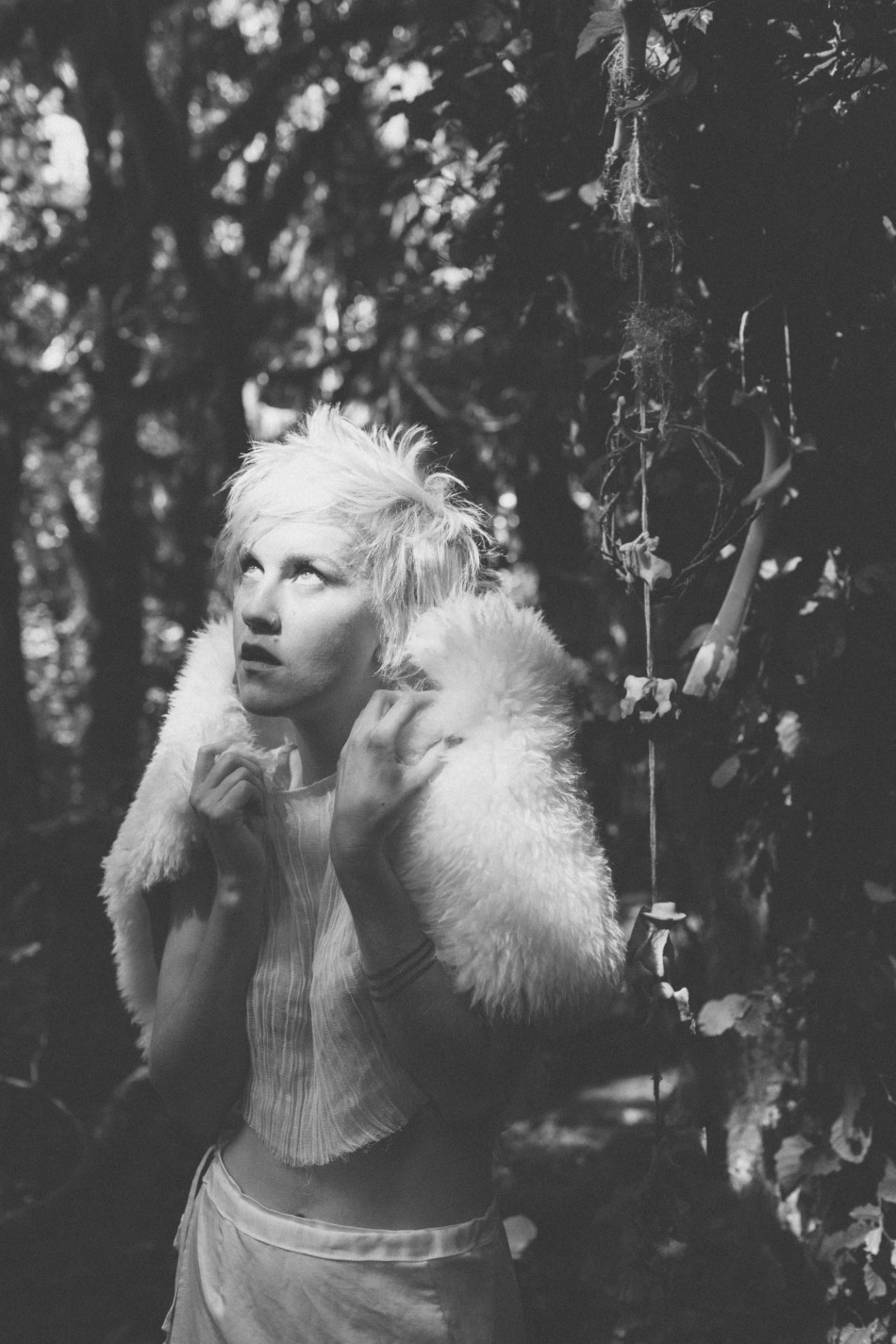 If you’ve ever seen Portland’s Johanna Warren live, you have witnessed her uncanny ability to captivate an audience. When lyrics begin to pour from her mouth, joining the aching torrent of chords fed by her effortless finger-picking, a hush tends to fall over the room.

Her first two albums, Fates and nūmūn, are enthralling in their own rights and were met with moderate success. However, listening to Gemini I, I get the feeling that she is just now really hitting her stride. This collection of songs is more textured and more satisfying than any of her past work, and yet there’s even more to come. The twin album, Gemini II, is slated for release next year and corresponds, track for track, to this one.

Warren has also gathered fellow artists Forest Veil, Indira Valey, and Vellum into a new label collective called Spirit House. I had the pleasure of asking the energy healer and singer-songwriter a few questions about her latest endeavors.

Ju: Could you comment on a few lyrics from the album and give us some insight about what inspired them?

This album is definitely the most autobiographical work I’ve ever produced. It all came out really fast and as a direct result of real interactions that I was having with my partner, and with my card reader about the interactions that I was having with my partner. [Many of the lyrics] are about the mirroring that happens in intimate relationships where you’re kind of working things out with yourself through the external form of your partner. A lot of [the lyrics are] real conversations, so there is a lot of switching back and forth between my perspective, his perspective, and this omniscient third point of observation.

“Tooth of a crocodile / I guess you were right all along.”

I’ve always been intrigued, ever since I was a kid, when I read about the birds who hop into crocodiles’ mouths and clean their teeth for them and it’s this symbiotic relationship where there’s trust. The bird trusts that the crocodile won’t eat it because it’s serving this function of being its dentist. So that kind of seemed like an apt metaphor for what we do in intimate relationships with each other where we invest trust and let people get close or put ourselves in vulnerable postions, because we’re getting something out of it too.

Ju: The single, “Hungry Ghost,” sounds to me like it could also be taken as a response to critics and the music industry.

Jo: When I finished this body of work, I was feeling strongly that, objectively, this is the best work I’ve ever produced and feeling like, “This is gonna catapult me into the next layer of the professional stratosphere. A big label has gotta come along and pick this up.”

And then that didn’t happen. It was a fascinating juxtaposition there. I was able to stand back and see, “I think this is really good and worth putting out into the world.” And at the same time, it was just doors slamming in my face, reaching out to the industry and getting responses like, “We can’t sell this.”

So Spirit House is all about, “We don’t need to wait around for permission from the powers that be to do what we’re already doing well.” It’s been empowering and validating to look around me and see a bunch of my friends in similar positions. [These are] songwriters who have deeply impacted me, people who have made art that changed my life and who are not famous, who are living humble existences, making their art because they need to. I’m hoping to inspire others to feel inherently worthy of expressing what they want to express.

Ju: The production value seems a lot higher on Gemini I than on your past releases, and I appreciate that it’s not over-produced. The emotional intimacy doesn’t get lost in the new setup. People often get caught up in “Oh, all these new bells and whistles.”

Jo: Yeah, we were really fortunate to have access to Dreamland in Woodstock, which is this amazing old haunted church turned into a recording studio and it’s a high-caliber space.

I always am kind of bummed out when artists who start out with bedroom recordings get more produced and it feels like it gets watered down. I’ve seen that happen with a couple of my favorite female singer-songwriters where they get to a certain point in their careers and then a big-shot male producer comes on and inserts his vision into what she’s doing and I’m like, “This doesn’t sound like you anymore. This sounds like that guy.” Bella [Blasko] and I have a long history of working together and it was cool to step up and be given more resources to grow into ourselves. It was like, “Oh, I guess I’m shredding on electric guitar now. Didn’t know I had that in me.”

Ju: In those songs where you bring in the piano, you seem to have a Joni Mitchell vibe going on. You often cite her, along with Elliott Smith and Nick Drake as your main influences. Is there an album or song that stands out as a defining moment in your musical experience?

Jo: In high school, I would listen to Blue every night as I was drifting into sleep, for at least a year and a half. I just listened to Joni Mitchell: In Her Own Words on audiobook. So much of what she had to say was [for me] just like, “Wow, I’ve always felt that and never knew anybody else felt that way, and thank you for saying it so beautifully and clearly.” Because she’s a visual artist too, which I also am, and it was inspiring to hear how much she maintained control [of the production of her music] from beginning to end. She talks about being the only woman in the room and what that feels like and how hard it is at first to get people to listen to you.

Ju: Are there any highlights on your upcoming tour?

Jo: I’m particularly looking forward to playing an outdoor stage in the desert in Joshua Tree, [California,] called the Moondust Grounds. I chose to skip some major cities in favor of going to little, beautiful places. I would rather have a lovely experience than play a more conventionally “legit-looking” show, and that’s where I’m trying to go in my career long-term. I don’t want to block myself from more mainstream success, but I’m more excited about staying at friends’ houses and having dinner together and playing for a room of people that I can talk to afterwards, than about packing a theater and having to hide my face as I run out the back door.

0 comments on “Johanna Warren: On Gemini I, Spirit House Records, and Crocodiles”