Last Night at The Glasshouse, Pomona, CA, Smoke Season, Haunted Summer, and Geographer, put on an amazing show, and they are doing it again tonight at the El Rey Theatre in Los Angeles. The line-up was great and I highly recommend checking out all artists’ because the vibes transmitted in the Glasshouse were in sync and beautiful.  Yet, the act that stole the show, in my opinion, would be Smoke Season.

Their Hot Coals and Cold Souls EP, does not do them justice when you then witness them live. With the proudest of words and excitement, I am eager to see this band grow, and in the process allow the world to fall in love with them as they bask in this powerful and almost poetic trance that each individual exudes on stage.

Gabrielle Wortman contains an on-stage presence that is pure magic; no other explanation. With a decreasing number of  stand-out women rockers currently on the music market, Wortman’s appetite to deliver her best performance on stage is infectious, and she is on my list of rising women in music to watch out for as the year progresses. With the combination of cool, sexy, and fierceness that exudes from Wortman, not forgetting her powerful vocal ability from that petite woman, is the recipe for a powerful package.

Jason Rosen’s cool demeanor complimented Wortman’s intensity, and the chemistry between the two, if possible, increased the value of their music. The details that they put into their performance showcases true love that their audience can feel. No complaints for the night, from the fog that perfectly was timed during their set, to the drumming and bass that made the sound fuller, the band executed the night. New songs were also performed last night and the anticipation for a release of a new album is high. The band ended their set with, “Simmer Down,” which is a personal favorite. Smoke Season is definitely a band to look out for and witness live if you ever get a chance. You won’t be disappointed. 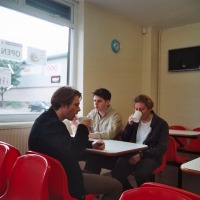